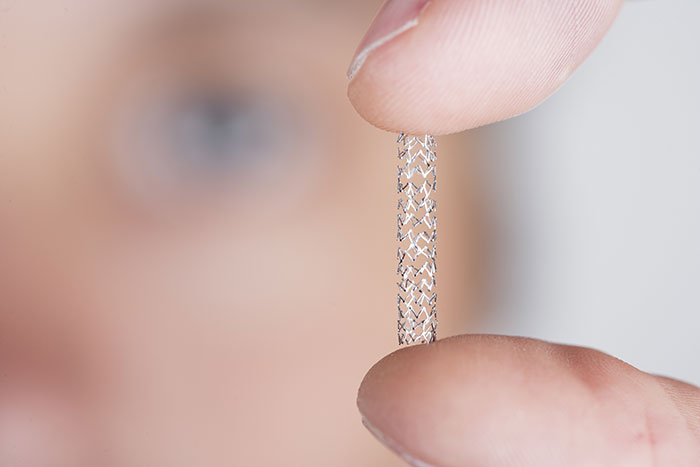 Synectic has been working extensively for years developing optimal techniques to manufacture products across numerous industries using Nitinol.  Having the ability to work in house with Nitinol allows us to rapidly prove out concepts and iterate working prototypes in short order. Many times, we get asked by customers what Nitinol is and how it can be used to improve their product. We've broken down these common questions into an easy to follow guide covering everything you need to know about this amazing metal alloy.

Nitinol (pronounced night-in-all) is a metal alloy that has unique properties and uses, the most common being that it can be made to “remember” or change shape depending on temperature. The name represents its elemental components and place of origin.  The “Ni” and “Ti” are the atomic symbols for Nickel and Titanium and the “NOL” stands for the Naval Ordinance Laboratory where it was discovered in 1959.  Scientists were trying to develop a heat and corrosive resistant alloy, and in that process, created an alloy made of 55% nickel and 45% titanium.

2. What is Nitinol used for?

Nitinol has been around since the early 1960s but was not commercialized until twenty years later, due to the tight controls needed in the manufacturing process.  It has become a very important material for designers of robotics and medical equipment over the past several decades.  Its superelastic (10X as flexible as other metals) and thermal shape memory properties are unlike any other material available for engineering and product development.

Nitinol is most often used in applications that require tight space requirements. Nitinol best performs in an area where conventional mechanisms cannot fit.  An extremely useful application for Nitinol wire is where a device or structure needs to be inserted thru a small opening and then released to open to a larger set size.  A structure can be compressed to fit into a small diameter delivery tube and then inserted into position and allowed to open to several times the diameter of the delivery tube.

3. How does Nitinol work?

One of the most valuable properties of Nitinol is the two-way shape memory effect. This shape memory effect is when the metal undergoes a reversible phase transformation between the Austenite and Martensite phases. The atoms of metals are arranged in specific structures, depending on their components, but rarely change structure shape while still solid.

Under high temperatures, the metal enters the Austenite phase, where it achieves maximum stiffness and is spring-like when bent. The metal enters the Martensite phase during low temperatures. In this phase, the metal feels rubbery and bends easily.  When Nitinol is in the Martensitic form it can be easily deformed into a new shape.  However, when heated through its transformation temperature it reverts to Austenite and recovers its previous shape.

4. What are some real-world applications where Nitinol is used?

In robotics, Nitinol can be used as an actuator where an electrical current (or heat) is applied to a stretched wire, and the wire will contract while the charge is applied and relax once the charge is removed.  Unlike most metals, Nitinol contracts in length when heated but will maintain the same absolute volume.  Also, its thermal movement is 100 times greater than other metals.

A bone staple is one example of the use of thermal size contraction; where the staple is stretched open and inserted into two holes in the bone to be reconnected and then heated to return to the original shape. This technique effectively pulls the two pieces together and holds them in place during the healing process.  Another medical device example is a stent which is cooled and mechanically squeezed to fit into a small diameter catheter inserted through a vein. Once positioned the stent is released from the constraining sleeve and allowed to return to its original shape, after reaching body temperature, holding the artery open.

For elastic deployment, Nitinol wire can be mechanically held in place in a fixture and then heated in a fluidized temperature bath, at a prescribed temperature and time, before being quickly submerged in cool water.  Once removed from the fixture the wire retains its shape regardless of angle or intensity of deformation. When let go, the wire will return to its set shape.  There are numerous examples of this application like The Homer Mammalok needle/wire localizer.  The curved wire is fed through a straight cannula and upon exiting it curves into a “J” shape it was previously set to. This process can be repeated dozens of times without deforming.

5. What are common challenges when using Nitinol?

One challenge when working with Nitinol is determining how to attach properly attached one wire to another as it can be very elastic or very stiff depending on its phase, making it difficult to weld or bond.  One method is to mechanically crimp wires together using other materials like stainless steel.  These crimps can then be welded (TIG) to other components to form the desired end product.

About Synectic Product Development: Synectic Product Development is an ISO 13485 certified, full-scale product development company. Vertically integrated within the Mack Group, our capabilities allow us to take your design from concept all the way to production. With over 40 years of experience in design, prototyping, and manufacturing, we strive for ingenuity, cost-effectiveness, and aesthetics in our designs.  Learn more about our prototyping services and see how we can help your next project.

Read our other prototyping articles

Everything You Need to Know About Prototypes

What is Machining? A Machining FAQ

4 Practical Considerations To Improve Your Prototypes

Visit our other divisions

Want to Become a Nitinol Expert?

HOW TO FORM NITINOL FOR MEDICAL DEVICES